This time my “seven-day-weekend” was over very quickly. I got quite a bit of photography done at Pakamisa Private Game Reserve, but I will have to go back soon to finish up the job – I am looking forward to it.

The image below is one of my favorite pictures I took today (www.pakamisa.co.za). Pakamisa’s owner Isabella Stepski – on one of her horses – got very close to this Giraffe bull. He was quite relaxed being viewed from horseback.

A few days away was great, but I am also looking forward to driving again on Thanda.

Have a good weekend!

It is hard to believe to see how close the riders can get to Giraffe, Zebra and many other antelopes on Pakamisa Game Reserve.

I am spending three days of my “off time” at the reserve taking images of the lodge, the reserve and the beautiful horses on their game trails.

For me it is the second time on Pakamisa, but I certainly will be back. Horseback safaris are a great addition to a South African safari experience as they provide very close encounters in an area without dangerous game.

PS: Unfortunately I cannot ride the Arab Horses at Pakamisa 😦 My portly figure is a bit to heavy for these beautiful creatures :-), so I took these pictures from a game vehicle.

I am now a qualified “Backup Trails Guide”. I have just received the certificate from FGASA (Field Guide Association of South Africa).

The next step is to log another hundred hours of walking and another fifty encounters before I can be assessed as Lead Trails Guide. This will take quite a while.

Have a good week – mine is already very good 🙂

PS: The picture shows me walking as Trails Guide during my recent course – Picture: Craig Fitt – Thanks

It is not always the Big Five which provide beautiful and special sightings. This Waterbuck bull was looking at us when we drove towards him on Ndlovu Highway. A rare treat.

We got many different antelope species on Thanda. Next to Waterbuck we have Impala, Wildebeest, Nyala, Kudu, Duiker, Steenbok and Reedbuck on the reserve.

… and a little special Waterbuck info: Waterbuck and Elephant are the only two large mammal species on Thanda which will not allow Oxpeckers to sit on them and feast on their ticks (see yesterday’s post: https://christiansperka.wordpress.com/2012/11/11/oxpeckers-and-buffalotail/) 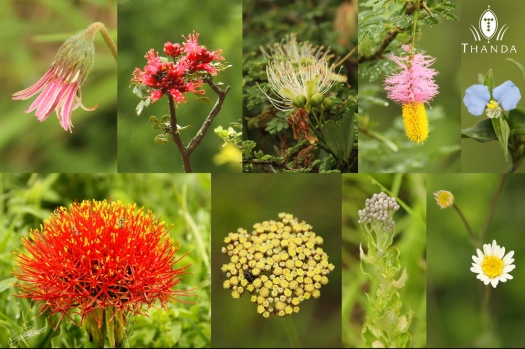 The winter (dry season) is predominantly brown and grey.  But – as I learn now – when the wet season (summer) starts the bush becomes very colorful.

I took pictures of these nine plants just on one drive from my home to the lodge.

One of my favorite flowers is then one from the Sickle Bush (Dichrostachys cinerea, known also as Bell mimosa, Chinese lantern tree or Kalahari Christmas tree – second from the right/top).  The bush itself on the other hand is a real threat to us field guides. The spines on the bush are so hard that they go straight through a tyre and one ends up with a lot of flat tyres when “off-roading” in areas with these bushes!

These Red-billed Oxpeckers take a ride on the back of a Buffalo bull. His tail almost reached the birds when he was swiping it across his back. The bird with the black beak is an Oxpecker chick waiting for some food delivery from the adults 🙂

Have a good Sunday! 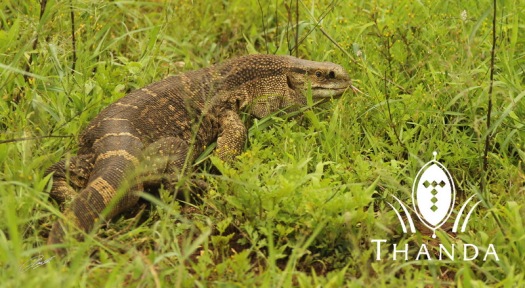 … and one can see much more reptiles at Thanda. I took this picture around noon when I was driving back from dropping of guests.

This Monitor Lizard (an ectothermic species) was enjoying the sun on one of our main roads. As I approached he decided it was safer in the grass.

There are five major groups of vertebrate animals (fish, amphibians, reptiles, birds, and mammals). One of the differences between these groups is the way their body temperature is controlled.

The other three vertebrate groups are often called “cold-blooded” animals. This term is falling out of favor with scientists because it is misleading. They are called, instead, ectotherms.  The blood of fish, amphibians, and reptiles is often warm. Their body temperatures are always close to the temperature of their environment.

The grass was bit high for one of our Lion cubs. The little one could not see properly so it decided to use the back of its uncle to get a better look what was going on.

Thanda Private Game Reserve is well known for its excellent game viewing. The Super Seven (Lion, Leopard, Cheetah, African Wild Dog, Black and White Rhino, African Elephant and Cape Buffalo) are spotted regularly. And as you know I publish many pictures of these magnificent creatures.

But especially in the summer season there are also many birds to be seen. Here is a small selection of bird pictures (African Hoopoe, Little Bee-eater, Violet-backed Starling, Fork-tailed Drongo, Village Weaver, Brown-hooded Kingfisher) . I will post more pictures for the birders among you over the summer month 🙂

We tracked our Elephant herd for a long time when we spotted them going up a mountain. It is amazing how these huge creatures can move up a hill.

On the same game drive we found our four Lion cubs resting in a road after playing hard.

And on the way back to the lodge we had a good look at one of my favorite antelopes – female Nyalas.

Another hard day in Africa 🙂