We have created a new Thanda e-brochure. It contains a lot of images and interesting information on 40 pages. All the wildlife images are mine 🙂

You can either view the brochure as a flipping book online at
http://www.edvc.com/Thanda/e-brochure/Thanda.html

or download it as a zip file to your computer at
http://thandablog.files.wordpress.com/2014/02/thanda-e-brochure.zip

or view the brochure as a pdf at
http://thandablog.files.wordpress.com/2014/02/thanda-e-brochure.pdf

Let me know what you think!

PS: The title page image is one of my favorite Lioness images. She was “bird-watching” when I took the shot 🙂

This young White Rhino female was looking for her mum when this picture was taken a few day ago. She was quite nervous being on her own.

The mother had separated herself as she gave birth to a new calf (no pictures yet 🙂 ).

Today, all three – mother, daughter and the new baby – were seen together.

This was a very cute Thanda sighting. The little Buffalo calf was “hosting” a Red-billed Oxpecker chick. They were posing for this portrait for quite a while.

PS: The Oxpecker chick is the same size as its parents, but it has a black bill and looks more fluffy 🙂 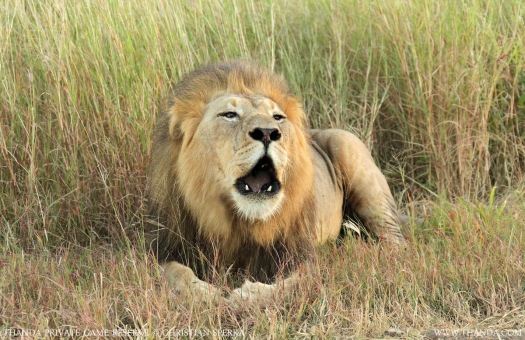 When – at sunrise this morning – Thanda’s dominant male started roaring only a few meters from our game drive vehicle all conversation stopped and everyone on the vehicle held their breath until the call was completed. This was not a beginner’s roar, but the territorial call of a dominant male. One does not have to hear it, one can feel it.

I have included a small sound bite of the roar – click on either of the images to hear the Lion. But it is only a poor representation of the amazing feeling when experiencing such a Lion’s roar with all ones senses. 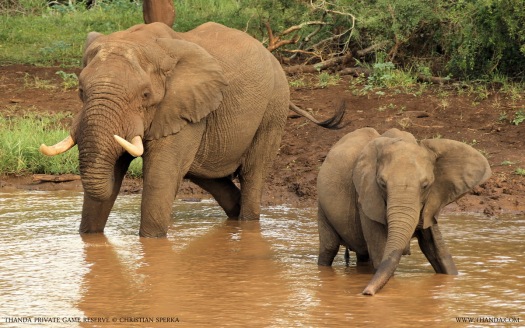 This picture shows an interesting comparison between an adult male and an adult female African Elephant. Size is the most significant visual sign of Elephants’ sexual dimorphism.

I do not often create black & white versions of my pictures. But when I came across this image of a young Lioness lounging in a tree I thought this would look good in b&w. And I like it!

The young lady surprised many Thanda guests when she presented herself just outside the Thanda Tented Camp during check-out time. A great good-bye for our guests. 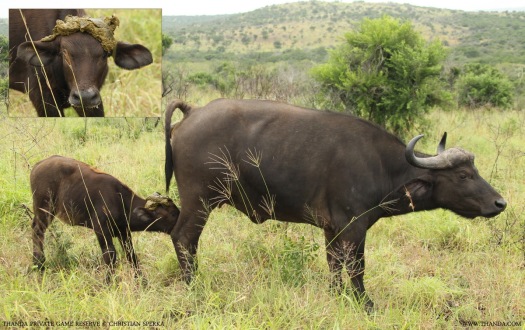 This Buffalo calf had a drink when it’s mum decided to go to the toilette! This happens quite regularly with Buffalo. 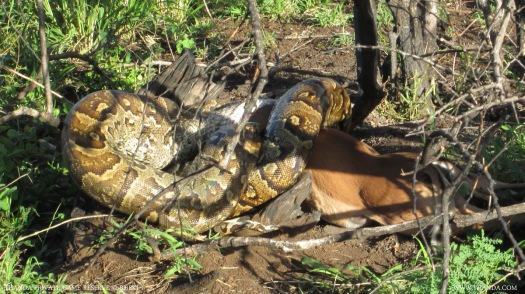 Bheki Ngubane – my tracker at Thanda – is driving with other guides when I am working on various special projects for Thanda.  So, a few weeks ago I bought Bheki a small Canon point-and-shoot camera just in case he gets a good sighting when driving without me (and my cameras :-).

Well, that was a good decision. Yesterday, while on an evening game drive with Thanda guests, Bheki and field guide Cela Manyanga spotted an incredible scene.

A very large African Rock Python had killed an adult Impala and was busy swallowing this large herbivore. The snake was still working on the Impala when the last game drive vehicle had left the scene. A very exciting sighting for all Thanda guests!

More about the African Rock Python …

The African Rock Python (Python sebae), is a large, nonvenomous snake of Sub-Saharan Africa. It is one of seven species in the genus Python. Africa’s largest snake and one of the five largest snake species in the world may approach 6 m (20 ft). The snake is found in a variety of habitats, from forests to near deserts, although usually near sources of water. The African rock python kills its prey by constriction and often eats animals up to the size of antelope 🙂 ! The snake is widely feared even though it very rarely kills humans. Although the snake is not endangered, it does face threats from habitat reduction and hunting.

This is my favorite of all the Lion images I took in January. When I was editing my January pictures I came across this portrait of one of the Thanda North Pride Lionesses.