Removing a snake from a place where it should not be can be a tricky business. And if the snake is a Black Mambas then it gets extra exciting.

Yesterday, I caught the largest Black Mamba I have ever seen (see video 1). This beautiful specimen was rather calm during the capture. I released it this morning in a remote part of the reserve.

And then midday today I was called to catch another of these fast moving snakes. This one was more ‘feisty’ and was quite agitated during the capture and the release (see video 2).

The picture credits for today go to Letishia Kleinschmidt and Jennie Pretorius. Thanks a lot. My favorite shot of today is Jennie’s picture of a ‘Black Mamba Selfie’ :-).

Congratulations to everyone who got the correct answer and thanks for all the other “inventive” guesses.

When I release captured snakes I usually place them in front of my GoPro to record the event. This small Cobra mistook the camera lens for an eye and targeted its venom accordingly (The picture shows her in “mid-spit”). Full marks for hitting the target 🙂 This was an excellent demonstration why it is very important to always wear protective goggles when dealing with a Spitting Cobra or any “unidentified” snake. Better safe than sorry.

These snakes are generally nervous and highly strung. When confronted at close quarters they spread their long narrow hoods and will readily “spit” in defense. By doing this the venom can be ejected at a distance of 2–3 metres (6½-10 feet), with remarkable accuracy. When in a confined area like a tube these reptiles might bite instead of spit.

In the last two days I captured and released two more snakes on the reserve. First a Mozambique Spitting Cobra was spotted around Thanda house. I capture the young snake and released it near one of Thanda’s waterholes, far away from Thanda house. The goggles I wear in the picture are just a precaution, in case the Cobra should choose to spit in its defense. This youngster only spat at my snake stick during the capture. The collage shows the release of the snake. 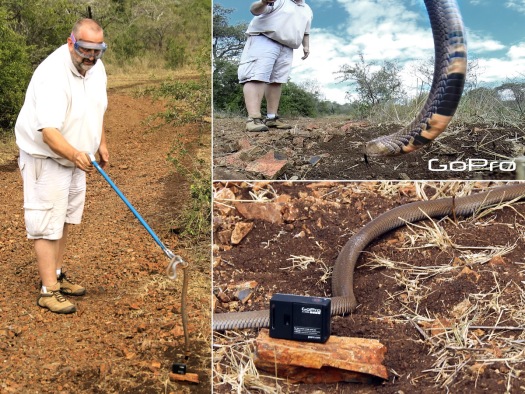 This image shows my snake handling gear and my snake barrel. In this picture the Cobra was inside the barrel, ready for the drive to its new home.

The second release and capture was of a young Puff Adder. It had hidden under a staff vehicle in the parking lot of Thanda’s base camp. For its own safety and the safety of the many people walking around that area we decided to catch the snake and release her in a safe distance away from the camp. This first collage shows the capture operation…

… the second collages shows the release of this shy reptile.

The images were taken by Magdel Geldenhuys, Letishia Kleinschmidt (thanks!) and my GoPro. 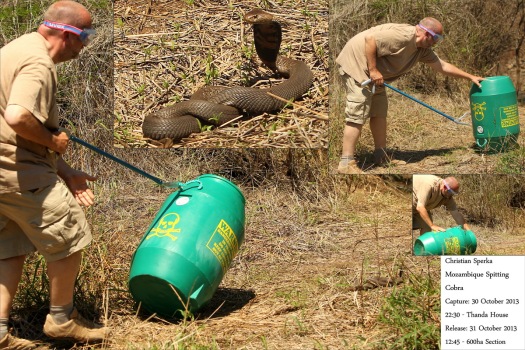 Well, a lot of you got it right! (see previous blog)

I use these goggles when catching or releasing spitting snakes (or if I do know which snake I might encounter). In this case I caught a Mozambique Spitting Cobra (in Zulu:Mfezi) which had strayed into a room at Thanda house late at night.  Today I released it onto another part of the reserve.

This collage of images shows the release of the snake. Thanks to Warren Beets for taking the pictures (I could not take any myself – I was busy :-))

PS: I will add a GoPro camera to my equipment set so I can record these sort of procedures on video – from my view-point.