When it has rained as much as it did the last few days we cannot drive off-road for quite a while. So game viewing becomes rather more difficult, especially when looking for carnivores.

This mornings game drive was therefore a great surprise. We left the Lodge looking for Lions. About half an hour into the drive we came across a male Leopard walking down the road towards us. Luckily he took his time moving off the road. 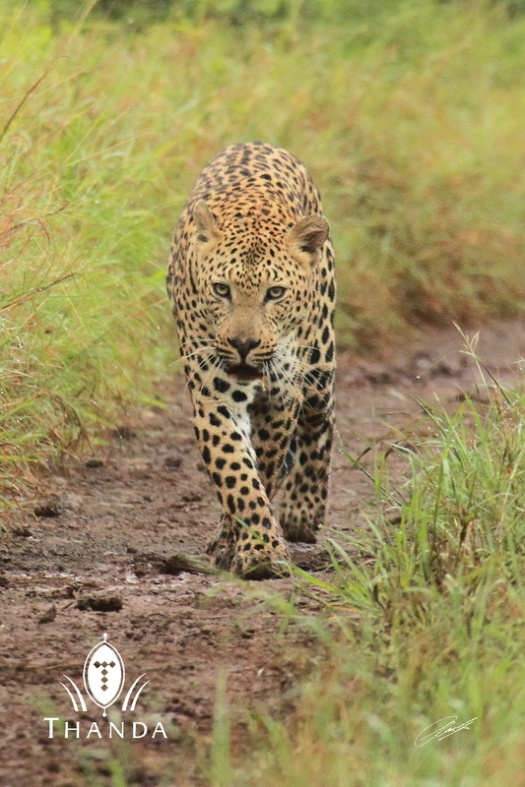 He was followed a few minutes later by a Spotted Hyena, which did not run immediately as usual, but stayed for a “photo shoot”.

And when we stopped for our morning coffee break a dazzle of Zebra nearby did not run away as usual, but approached us quite close. Two of the males in the group started fighting which resulted in an interesting series of pictures.

What a morning 🙂 Have a good week!

It is hard to believe but I had four great Leopard sightings in one week. That is more than in the six month since I started working at Thanda.

Today’s sighting was especially good. The young Leopard in the picture above stayed around a waterhole for half an hour and then joined a second Leopard in the bush nearby.

Well, I had planned not to publish a “Big Five” picture for ten posts. But tonight’s Leopard sighting changed my mind.

On the way back to the lodge we had a very special night encounter. This Leopard female was a few meters (yards) of the road in the thick bush. When I moved the game viewer a bit closer she had a good look at us before she disappeared  into the bush. Bheki’s excellent spotlight work made this picture possible.

I really like her alert expression in the picture!

Today we had an excellent Leopard sighting on Thanda. This beautiful large male was first hiding in thick bush but then decided to rest in the open. He had a few wounds which suggests that he has been in a fight recently.

On the same game drive we saw Elephants and Lions. A very productive afternoon 🙂

After two weeks of rain, wind and cold we had some great drives in the last few days.

During the bad weather it was very difficult to find animals. They all were hiding in the thick bush from heavy rains,  very strong winds and many thunderstorms.

But this morning we got rewarded for our hard work and patience. When we left the lodge we spotted a Leopard just as we left (he did not stick around, but we got a good look). Then we met our dominate male Lion on to of a hill. We tracked our Buffalo herd and just as we left them we saw two White Rhinos (mother and daughter) in an open area. Before we headed back to the lodge we went to the area where we saw the breeding herd of Elephants last. We did not find them but we found  one of our oldest Elephant bulls. After observing him for a while we turned back to the lodge.

PS: All pictures above were taken today!

In the last few days I had quite a few “first” Thanda sightings.

First I go to see our new Female Cheetah, then a Black Rhino and the four new Lion cubs.

Today we saw Spotted Hyenas at daylight and in the evening a male Leopard just when it go dark.

Five “firsts” in a short time 🙂

It was a rainy day today and the morning started with a walk in cold and wet conditions. We heard a pair of Leopards mating. So we fetched a game viewing vehicle to have a look at the mating pair (as it is not a good idea to view mating Leopards on foot :-)).

We watched them for quite a while. The female was quite eager, but the male was not interested at the time. He was just grooming himself intensively. The short video shows a mating attempt initiated by the female. It was the first time that I saw a male and female Leopard together in the wild.

PS: I only had my “Point and Shoot” camera with me on the walk, so the picture and video are not SLR quality, but I thought some of you might enjoy the experience. 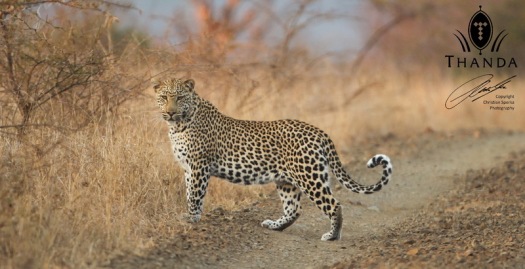 I was very surprised when, on one of my first game drives at Thanda Private Game Reserve in 2010, this male Leopard crossed our path just as we left the lodge.

In Kwazulu Natal Leopards are usually very shy and are very hard to view, as they are still prosecuted by humans in many areas. Unlike in the Kruger National Park and the surrounding game reserves the Leopards in this part of South Africa have not be habituated to “non-threatening” human presence over many decades.

For more leopard images from my various trips to southern Africa go to www.sperka.biz/leopard.

I will start working at Thanda Private Game Reserve in June 2012.

Leopards are my favorite species of cats!

Since 2002 I am supporting a leopard conservation project in South Africa. It is called the Munyawana Leopard Project.

This week’s picture is of one of the female project leopards walking the boundries of her territory at dusk.

If you like to know more about this project and the organisation which runs the project go to www.panthera.org/programs/leopard/munyawana-leopard-project.

If you like to see more of my pictures taken for the project go to www.sperka.biz/mlp.

For more leopard images from my various trips to southern Africa go to www.sperka.biz/leopard.

The Leopard (Panthera pardus) is the smallest of the four “big cats” in the genus Panthera, the other three being the tiger, lion, and jaguar. It was once distributed across eastern and southern Asia and Africa, from Siberia to South Africa, but its range of distribution has decreased radically because of hunting and loss of habitat. It is now chiefly found in sub-Saharan Africa; there are also fragmented populations in the Indian subcontinent, Sri Lanka, Indochina, Malaysia, Indonesia, and China. Because of its declining range and population, it is listed as a “Near Threatened” species on the IUCN Red List.

Compared to the other “big cats”, the leopard has relatively short legs and a long body with a large skull. Both leopards and jaguars that are melanistic (completely black or very dark) are known as black panthers. The species’ success in the wild is in part due to its opportunistic hunting behavior, its adaptability to habitats, its ability to run at speeds approaching 58 kilometres per hour (36 mph), its unequaled ability to climb trees even when carrying a heavy carcass, and its notorious ability for stealth.

I do not like flash pictures. They are mostly flat and have no depth. In wildlife photography you have seldom the time for good flash setup (with multiple flashes). I’d rather use higher ISO and try my luck without a flash. A standard, handheld flash-light can help producing a glint in the eye of an animal and lighten up a dark corner.